Another of Rochester's great optical works was the Wollensak Optical Company. Founded in 1890 by Andrew and John C. Wollensak, with financial backing from Stephen Rauber, the Wollensak and Rauber Co. set out to manufacture an innovative shutter design for cameras. Originally located at 280 Central Ave, they outgrew their quarters after the purchase of the Rochester Lens Co. in 1902. That same year, Mr. Rauber retired and the company became known as the Wollensak Optical Co. The company changed locations several times before settling at 850 Hudson Ave. in 1924.

The acquisition of the Rochester Lens Co. gave Wollensak the ability to produce a line of fine lenses, as well as shutters; they introduced their line of Royal Anastigmat and Royal Portrait lenses, as well as simpler lenses for snapshot cameras. By 1918, the Royal line had been replaced by a series of lenses which had names all beginning with the letter V. The top-of-the-line anastigmat was the Velostigmat Series II.  This was an excellent lens of the Tessar type. Also on offer was the Velostigmat Series Ia, a convertible lens similar to the Bausch and Lomb Protar VI. They also made a Rapid Rectilinear called the Versar, Petzval-type lenses known as Vesta and Vitax, and the famous soft focus Verito and Veritar portrait lenses.

The line of shutters proved profitable as well. After producing a series of simple but reliable shutters for roll film cameras, and respected Optmo and Regno shutters, Wollensak introduced the Studio shutter for large format portrait lenses, and a series of shutters for all size cameras (all of which had names in Greek alphabetic sequence). These were the Alphax, Betax, Gammax and Deltax. All four of these were later replaced by a rugged, faster shutter called the Rapax.

During the Second World War, most of Wollensak's production went to the war effort. They made thousands of aerial recon lens, as well as many lenses for Graflex Speed Graphic cameras, the standard ground camera of all branches of the military. This cemented a relationship between Wollensak and Graflex, and Wollensak manufactured the Graflex Optar series of lenses for Graflex cameras for the next thirty years.

After the war, photography boomed as a hobby, a profession, and an art form, and Wollensak had a lens for every type of camera and purpose. They produced a line of excellent Raptar lenses for still and motion picture cameras, wide angle and telephoto optics for all formats, and many enlarging and printing lenses. For the graphic arts industry they made a line of Process Anastigmats and Apo-Raptar lenses. Nature and sports photographers admired Wollensak's 500mm Fototel f /6.3 lens, one of the earliest telephoto mirror lenses. Wollensak also manufactured the Fastax series of high speed motion picture cameras, along with Fastax Raptar lenses. This product line was successful and was later acquired by the Redlake Corp. 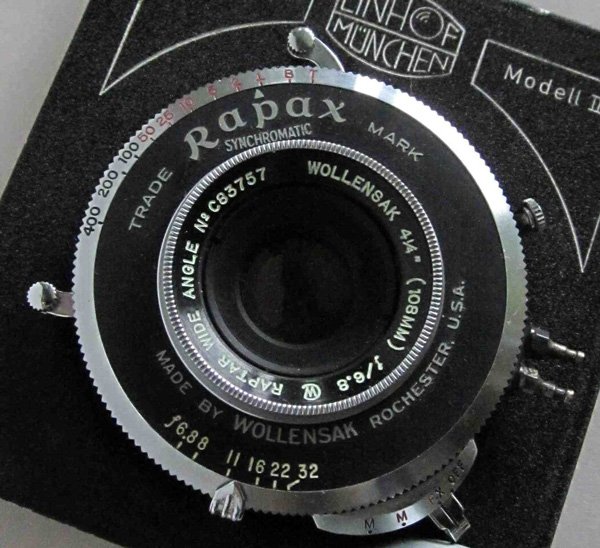 In 1954, the company was purchased by the Revere Corp., a maker of photo equipment and small appliances, and a major buyer of Wollensak motion picture lenses. In 1960 the operation was sold once more, this time to the 3M Corp. During the 1960's competition from postwar Japanese and German camera companies took away market share, and as photographic styles and equipment demands changed rapidly, Wollensak and many other U.S. based firms couldn't seem to keep up with the changing times. Production decreased, and in 1972, the Wollensak plant ceased its operations.