One of the most influential lens designers in history, Paul Rudolph was born in 1858, and raised in Thuringia, in central Germany. He attended universities at Munich, Leipzig, and Jena, graduating from that last in 1884 with a degree in mathematics.  Although his original intent had been to teach, Rudolph instead took a job with the firm Carl Zeiss of Jena, working as an assistant to Ernst Abbe.

Abbe and Otto Schott had just built a new glassworks at Jena, providing new materials for lens manufacturing. Rudolph was tasked with designing improve microscope objectives, experimenting with the new glass types; additionally, it fell to him to start a photographic lens line for Zeiss. The alliance proved a productive one: between 1890 and 1893 Rudolph designed the Anastigmat series of lenses (later known as Protar lenses) which were successful for many years. 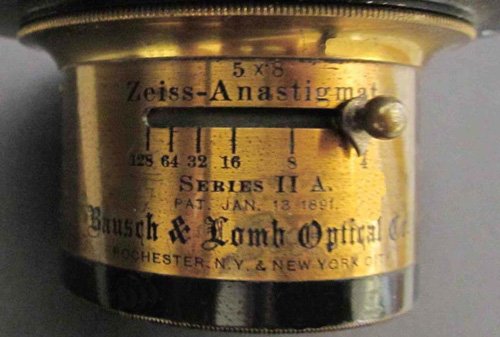 In 1896, Rudolph designed the Planar lens, based on a telescope objective by Gauss. In it, Rudolph introduced the use of a buried surface, which corrects chromatic aberration. His was not the first double Gaussian lens design, but it remains one of the finest and most versatile, and is still the basis for many short- and medium-focus fast lenses for motion picture use, and for small- to medium-format still cameras.

His next design effort, the Unar, was a good lens when he designed it in 1899, and evolved over the next three years into the most successful lens design of his career, the famous Zeiss Tessar.  The Tessar was then, and still is today, the world’s most widely used and copied photographic lens. Zeiss had a monopoly on the design until the patent expired in 1920 but in the meanwhile, licensed its patent to several other manufacturers, including Ross in England, and Bausch and Lomb in the USA.

In those years, designers were paid royalties on the sales of their products, and in 1911, Rudolph was able to retire, a wealthy man. But inflation in post-World War Germany brought him financial ruin, and so at age 62, Rudolph returned to work, first at Zeiss for a short time, and then for Meyer, at Goerlitz, in Germany.

It was while working here that Rudolph designed the Plasmat, a convertible lens for large format cameras, and a series of Makro Plasmat lenses for the motion picture industry. Despite its tendency to flare, due to the number of separated elements in its design, the plasmat was well liked and widely used. In the 1930’s, Zeiss introduced an anti-flare lens coating; at that point the plasmat became the basis for many excellent modern view camera lenses (including the Symmar f5.6 from Schneider, the Sironar from Rodenstock, and the Fujinon W series from Fuji). In 1933, having finally recovered financially, Rudolph retired again. He died in 1935.