Here in Rochester, the two German immigrants whose partnership started the Bausch and Lomb company were interested in the manufacture of monocles; over the years, of course, the range of products they developed changed as the world and its needs changed. Materials became scarce, alliances shifted, militaries became more sophisticated, technologies were driven more and more by the demands of the marketplace and the research at Bausch and Lomb itself helped drive the rapid evolution of the field of optical sciences throughout the twentieth century.

This photograph was taken at Bausch and Lomb sometime in the 1950’s.  The gentlemen portrayed here are a group of optical engineers employed there at the time; the diagram on the chalkboard is for a wide-angle motion picture lens, one of the areas that Bausch and Lomb concentrated on in the years after the world wars—their CinemaScope lens, developed during this same time frame, was the thing that allowed wide screen movies to be made.

Sadly, the names of these engineers have not come down to us (nor do we know what, exactly, may have developed out of the blackboard sketches in the photograph). We do know a little bit of the provenance of this image: it was shot by a photographer named Dick Shannon, himself an employee of the company, a photographer in their in-house advertising division. He left their employ in 1960, which helps to narrow the date of the photograph’s being taken, but otherwise, nothing else is known about it. The picture was found in Shannon’s work folders after his death in 1999. 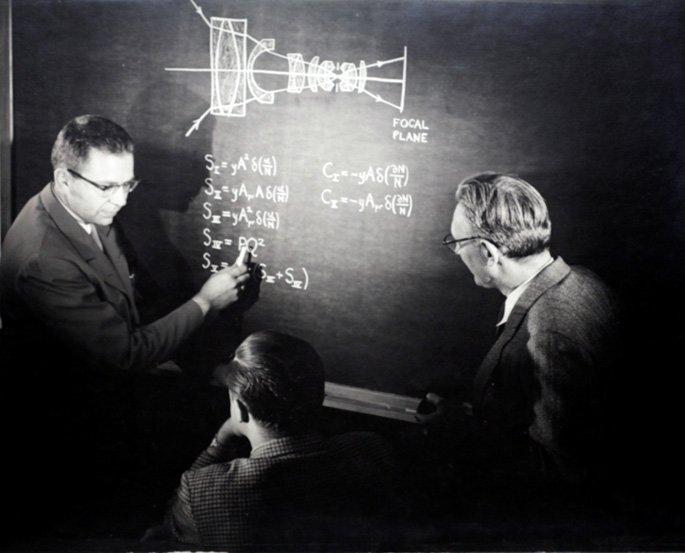