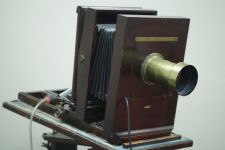 Here at Westech Optical, we’re passionate about engineering, innovation… and about history. We can’t get enough of that, and luckily for us, located as we are near Rochester, NY, we’re surrounded by artifacts of the history of the optics industry, both home-grown and foreign.

The conference room at our offices is dominated, in one corner, by the large format camera pictured here. Although the large camera body on that tall camera stand is undeniably arresting, for an optics geek, the lens is the real point of beauty. It’s a circa 1890 Ross-Petzval lens. 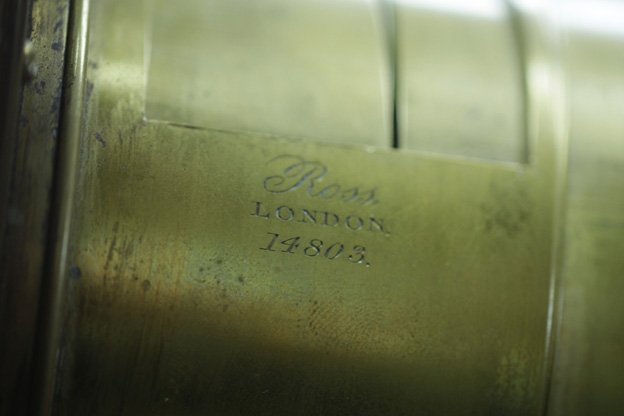 Thomas Ross founded his lens designing company in 1830 in London; as manufacturers, they patented designs of their own (notably a wide angle lens) but also produced lenses from other designers under license, including lenses from Zeiss, Goerz, and of course, Petzval lenses, such as this one. (The company was acquired by Avimo in 1975, and they were then taken over by Thale Optics.)

Petzval lenses have a special place in this corner of history, as they were the first lens designed specifically for photography and so thus began the real era of optics in that field. Their lens speed made them especially suitable for portraiture work (a type of work the daguerreotype had initially been incapable of). The Ross company was able to improve the lens speed once they began its manufacture; because the design had only been patented in its inventor’s native Austria, the lens was soon duplicated all over the world, and the name “Petzval” refers solely to the design of the lens, and not to any manufacturer or particular specification.